The presentation will seek to differentiate the nutritional (food) and respiratory (oxygen) functions of the placenta and discuss which assessments are more strongly associated and predictive of pregnancies at high risk of stillbirth. 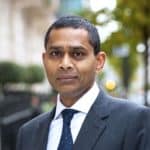 Professor Basky Thilaganathan was appointed Director of Fetal Medicine at St George’s Hospital in 1999. His research interests are focused on Maternal-Fetal medicine, with a particular interest on placental dysfunction and preeclampsia (TED talk: http://bit.ly/2i1SqDk). He undertook his undergraduate training at King’s College London, where he obtained a BSc in Genetic Engineering (1985) and MBBS (1988). He completed his postgraduate training at King’s College London and St Bartholomew’s Hospitals, culminating in attainment of MRCOG (1995), MD in Fetal Medicine (1996) and Certificate of Completion of Training (1998). He was awarded the Fellowship of the Royal College of Obstetricians and Gynaecologists (FRCOG) and an Honorary Doctorate (PhD) from Uppsala University in 2007.

He has authored two undergraduate and six postgraduate text books in obstetrics and fetal medicine. He is the Clinical Director of the Tommy’s National Centre for Maternity Improvement located at the RCOG/RCM and is Editor Emeritus of Ultrasound in Obstetrics and Gynaecology, the medical journal affiliated to ISUOG. He is a Council Member on the Royal College of Obstetrics and Gynaecology (RCOG) and represents the RCOG on the UK National Screening Committee and the DH Saving Babies Lives Care Bundle oversight committee. He is also the Clinical Lead for the development of the first dedicated high-throughput cfDNA screening NHS lab to undertake cfDNA aneuploidy screening in pregnancy (www.theSAFEtest.co.uk).

He has authored over 300 peer-reviewed publications in indexed journals. His major research interest is placental dysfunction leading to pre-eclampsia, fetal growth restriction and stillbirth. He currently holds research and commercial grants to the value of £1.5m – including EU-funded research. He has led on the implementation of algorithm-based screening at St Georges which has led to a 80% reduction in preterm pre-eclampsia – the severest form of the disease

Professor Thilaganathan has disclosed that he does not have any real or perceived conflicts of interest in making this presentation.

This presentation was part of the Stillbirth Summit 2021.   This individual lecture will be awarded .5 hours of continuing education credit to include viewing the lecture and completing evaluation and post-test.  Once received a certificate will be emailed to the address you provide in the post-test.  If you did not register for the Summit WITH Continuing Education, you can purchase the continuing education by clicking here.  This purchase will provide you access to all Stillbirth Summit 2021 lectures including continuing education credit. There is no charge for viewing the presentation.