Being A Dad With Help

“It’s time to go,” I said as I pushed my wife, Tandy, in a wheelchair toward the elevator of the labor and delivery ward.  We passed by several rooms in the hall where inside those rooms the outcome of pregnancies ended differently than ours.  Happier. Full of warmth and life and smiles and crying babies.  We walked down the hall with cold heavy footsteps in a fog of grief and sadness.  Our daughter, Mary-Alice, was stillborn at 36 weeks.  36 hours earlier, I didn’t know what “stillborn” meant.  I didn’t know what to do, but I put one foot in front of the other because I knew we had to get to the elevator.  Beyond that, I didn’t know what lied ahead.

I hit the button on the elevator to the main floor and we rode in silence.  It was too hard to think. The ding of the elevator almost woke us up from the fog we were in.  The doors opened and we walked to the large glass exit doors of the hospital.  The glass was from floor to ceiling letting in tons of light and a nice view of the trees, but the exposure to that much of the outside world stabbed me with a rush of fear. 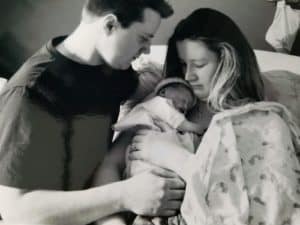 I don’t usually share this part of my journey with stillbirth.  It’s probably a “dad thing” to not share how we struggle with those questions.  Usually when I tell the story I say, “My wife Tandy and I have two stillborn children – Mary-Alice was stillborn at 36 weeks on April 1, 2008, Amelia was stillborn at 5.5 months on April 11, 2011.  We don’t know why this happened, but we miss them dearly and we are trying to create positive change and awareness around stillbirth and pregnancy loss.”  Sometimes I give a little more detail, but I certainly don’t talk about my struggle with grief or the fact that I had no idea how to process it.  I had no idea how to support Tandy.  I had no idea how to explain death to our son.

Searching for some kind of support a few days after Mary-Alice passed away, Tandy and I went to a meeting of The Compassionate Friends.  If you are not familiar, they are a national support group for parents who have lost a child at any age and for any reason.  When we walked in, the room was full of older parents.  Tandy walked in ahead of me.  When she saw how different the parents were from us, she turned around for a moment wanting to leave, but we turned forward and walked in.

We were welcomed in the warmest and kindest way and we learned that although we were all different, we all faced the same challenge – the grief and loss of losing a child.  That first meeting, one of the dads put his arm around me and he said, “I am so sorry for your loss and I want you to know that you will be okay.  Life from this point on will be different and you’ll get into a ‘new normal’ but you will be okay.  I am glad you came and I hope you will be here next month.”  I will never forget that.  I realized that it is okay that I don’t know how to get through grief, but I know that I have people who are here to walk with me.  That’s the key with being a grieving father – you can’t “fix” grief.  All you can do is take one step at a time.  It’s easier when you have support with each step.

Tandy also reached out to Star Legacy Foundation and we received additional support.  With Star Legacy, one of the most important things I learned was how men and women grieve differently and it’s important to be supportive of that for both people in a relationship.   I also learned tips on how to explain something heavy like stillbirth to our son.  With Compassionate Friends, I appreciated that there was a safe place for me to tell our story and let loose pent up grief and sorrow.   From both, I learned that it’s okay to not know.  The important thing is to be okay with knowing that you don’t know, and that it’s also okay to reach out for help.  Sometimes dads need help.

Tandy and I attended Compassionate Friends group meetings for several years and became good friends with several couples from the group.  Their support and guidance helped me when I had no idea what to do.  We turned our grief and the solid footing we received from our support into action to make a difference.  We started a run/walk fundraiser for Star Legacy Foundation in 2014, the Mary-Alice & Friends 5K that will have its 5th anniversary event this month in Moorhead, Minnesota.  Tandy started an online support group on Facebook for parents of stillbirth and infant loss, which now has more than 3,000 members.  The 5K, the support group, and our work with Star Legacy Foundation are ways for us to honor Mary-Alice, Amelia and all stillborn babies.  It’s also a way to give support and guidance to those who reach out for help.

Whether your loss was recent or years ago, reach out to someone. Tell your story. Ask others about their stories. It is okay to talk about it.  Find support in others because it is a gift.  Dads with children in heaven need help sometimes, so I encourage you to reach out.

I wish all the dads out there a Happy Father’s Day.  Know that you are supported.  Take care.

Jason Pratt serves on the Board of SLF. He and his wife Tandy have had two stillborn daughters, Mary-Alice and Amelia. 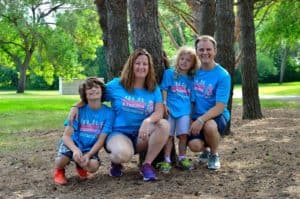 Being A Dad With Help