Is cord around the neck (nuchal cord) a problem or not?

Our guest blog this month is provided by our good friend and esteemed colleague Dr. Jane Warland of Adelaide, Australia.  We are grateful to Dr. Warland for all the work she is doing to prevent stillbirth.  If you have a question for Dr. Warland you can submit it here.

As I midwife I have certainly seen many babies born with the cord around the neck who are born alive and well, apparently completely unaffected. I have also seen plenty of comments from women on facebook and other social media who are prepared to say “my baby was born with the cord around his neck and he was fine” implying, by making that statement, that because their baby was fine that that must mean that it is never a problem!

I have also seen the other side of the story. My daughter Emma was stillborn with the cord around her neck. Whilst I have never thought that this was the only reason for her death I think it probably contributed, as I will explain below. I have also served as a midwife on South Australia Perinatal sub committee. This committee looks at all stillbirths in South Australia and classifies the cause of death. Whilst serving on this committee I had the privilege of learning from the wonderful Dr Yee Khong (South Australia’s awesome perinatal pathologist) about signs that he sees in cords of stillborn babies that indicate to him that the cord played a part in the stillbirth. That said I also know from my service on this committee that cord round the neck is quite rarely attributed as the cause of death, even if it has played a big part; it is usually considered a contributory factor. This means that when people read perinatal statistics they don’t see “cord around the neck” as a cause of death and this can lead to the false assumption that cord round the neck never causes stillbirth.

So I think the short answer to “is the cord around the neck a problem or not?” is “it depends”.

Depends on what? Probably lots of things but here are the top 3…IMHO:

· The type of wrap

· The vulnerability of the unborn baby

Jason Collins has done a lot of work in this area and he describes two types of nuchal cord illustrated in the picture below:

Type A circles the neck but is able to slide, Type B locks on itself and can tighten. Times when it is especially likely that the tightening can occur are when the baby naturally drops into the pelvis ready for birth at around 36 weeks and also when the baby moves down into the pelvis during birth. 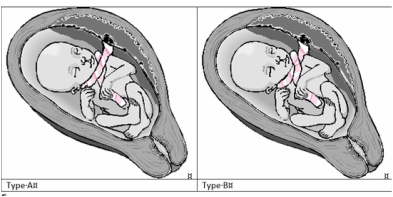 So if the baby has a type B cord then clearly this has the potential to be MUCH more problematic than a type A. Why? Well the type A is likely to slip past the body as the unborn baby moves around and/or descends during birth whereas the type B will tighten and may cause such distress that a c-section is warranted and can also cause the baby’s lifeline to become squeezed and blocked such that it can result in the unborn baby’s death. Can the person delivering the baby tell if the baby was a type one or type two cord? No BUT it can be clearly seen on ultrasound…if you are looking!

The baby who dies to stillbirth often has a combination of factors which together result in stillbirth. The tricky thing is that whilst we know some factors that make the baby vulnerable to stillbirth such as the baby who fails to grow, or the baby who fails to move as normal, there are many factors that we don’t know about yet that also make the unborn baby vulnerable. Looking at the circles we can see that if the baby is vulnerable AND he has a type 2 cord around his neck AND he has a posterior located placenta AND a long skinny cord AND mother who regularly sleeps on her back that all these factors combined may just be the straw for THAT baby.

My “triple risk model” helps give a visual for this: 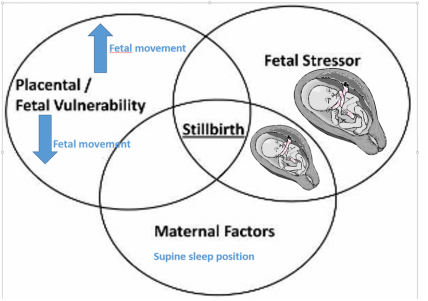 There are many other factors that can come into play regarding whether or not the cord around the neck MIGHT be a problem for SOME babies. These include: the position of the placenta, the length of the cord, the amount of wharton’s jelly and the “cord design” as well as the position of the baby. Briefly if the cord is thick, normal length, nicely spiralled (without being excessively so), has three vessels and lots of wharton’s jelly then THAT baby is much more likely to be born alive and well even IF the cord is around the neck than if the cord is long, skinny, straight and with minimal wharton’s. For more about this have a look at Dr Collin’s book Silent Risk

So should a pregnant mother worry if it is seen on ultrasound that her unborn baby has the cord around its neck? No she shouldn’t worry BUT she should be aware that there may be other factors at play (such as I have listed above) that mean that this could end up being a problem for her unborn baby. So IF she knows that her baby has the cord around its neck (an oftentimes she doesn’t) then that’s the mother who should pay particularly attention to what other factors she can remove from the circles of the triple risk model to help keep her baby safe.

Is cord around the neck (nuchal cord) a problem or not?