Good Data: The First Step toward Stillbirth Prevention in the United States

The significance of stillbirth around the world has been documented. Unfortunately, awareness of the issue in our society and commitment by organizations and health systems to addressing it has been scarce. While the majority of the world’s stillbirths occur in low-resource settings, the numbers in high-resource countries are not insignificant. (Click on image to see state score cards) 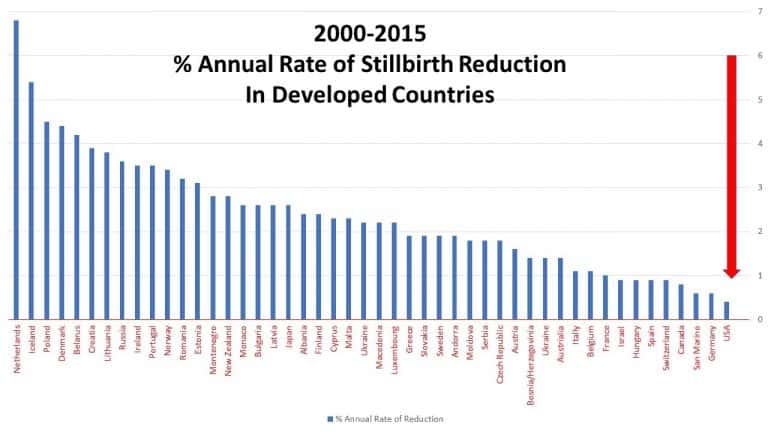 If the United States could match the reduction rates of the best-performing nations, thousands of lives could be saved and the global picture of stillbirths in high-resource settings would look very different.

The first step is to identify and quantify the problem.  Yet stillbirth statistics from the US are not easy to obtain and are not widely known.

The Stillbirth Advocacy Working Group developed a Global Stillbirth Scorecard to track progress being made around the world toward ending preventable stillbirth. Using many of the targets highlighted in the Lancet series, it provides an overview of the progress being made in high burden settings.  This initiative is also being expanded for low burden settings.  In order to know where the United States will be for those benchmarks, a deeper look into the numbers is required.

Star Legacy Foundation created the United States Stillbirth Scorecard to provide a dashboard view of stillbirth in this country.  The goal was to create awareness and learn where we currently stand.  The data was obtained from the CDC Wonder Center for Health Statistics and individual state Departments of Health.

The reporting system in the US created some challenges.  While the most common definition of stillbirth in the US is 20 weeks of gestation or later, that is not standard for all states.  Moreover, some states restrict their data collection to the given definition, while others do not.  Additionally, not all states have policies in place to make the data accessible to the public. Despite those barriers, a significant amount can be learned from this work.

The stillbirth rate in the United States in 2017 was 5.9 per 1,000 live births. The best-performing states had rates as low as 3.4 (New Mexico), while the worst-performing states were as high as 11.1 (Mississippi).  The Office of Disease Prevention and Health Promotion’s Healthy People is a federal initiative to identify national objectives toward improving the health of all Americans.  The Healthy People 2020 target for stillbirths is 5.6/1,000 live births. Twenty-six states have rates higher than the Healthy People 2020 target.

The best-performing states were New Mexico, Massachusetts, Vermont, New Hampshire, Montana, and Texas.  The worst-performing states were Mississippi, Alabama, Georgia, New Jersey, and the District of Columbia.  Some states have made significant improvements over the last ten years (District of Columbia, New York, South Carolina, and Virginia).  Others, unfortunately, have much higher rates than ten years ago (Alaska and Tennessee).

Racial disparity is a concern as it is in many other high-income countries.  Black/African-American women experienced stillbirth rates of 10.3/1,000 live births, followed by Native Americans/Alaska Natives at 7.7/1,000 live births.  Hispanic, white, and Asian/Pacific Islander rates were below the Healthy People 2020 target at 5.0, 4.9, and 4.3, respectively.

Like most data, these results prompt many questions.  What are the best states doing differently?  How have some states made significant improvements while others got worse?  What changed in the states that had significant increases or decreases?  What is causing the racial disparity?

Seeking answers to these questions must be among the next steps.  Examples could include initiatives that improve access to data, create a national definition of stillbirth, include fetal death statistics in annual mortality reports, or investigate the causes of significant differences in stillbirth rates in various communities or states.

This effort does not give us the answers to reducing preventable stillbirth.  But it can raise awareness of the issues, better define the problem, and highlight opportunities for advocacy.  For the United States, it provides a deeper look into the high-income nation that has the greatest opportunity to affect stillbirth rates around the world.

Lindsey Wimmer, RN, MSN, PHN, CPNP, CPLC is Executive Director of the Star Legacy Foundation. She has a Bachelor of Science degree in Nursing from St. Catherine University and a Master of Science degree in Nursing from the University of Colorado Health Sciences Center. She is certified as a Pediatric Nurse Practitioner and in Perinatal Loss Care. Lindsey is also a bereaved mother to Garrett who was stillborn at 38 weeks in 2004. Email: lindsey@starlegacyfoundation.org

About the Stillbirth Advocacy Working Group

The Stillbirth Advocacy Working Group was founded by the Partnership for Maternal, Newborn and Child Health, and is co-chaired by the International Stillbirth Alliance and the London School of Hygiene & Tropical Medicine.