I am often asked if it is hard to be engaged in work regarding stillbirth on a daily basis.  Yes – but no!  The stories are heartbreaking and I wish that no new family would need to find us.  But I know in my heart that it is important work.  It is how I parent my son who died and how I try to make the world a better place.

And then we get a story that explains it all better than I ever could.  We first met Paul and Nikki two years ago when they had just experienced the stillbirth of Zayne.  They were like many parents who were asking many questions, needing to keep his memory alive, and wanting to make sure future families didn’t endure the pain they had lived.  Theyfirst  held Zayne’s Anchor of Hope Day in 2016 and brought together an incredible community of people in the Houston area.

Nikki recently shared the story of Daxtyn.  Daxtyn is Zayne’s little brother.  And he could have easily been stillborn just like his big brother.   But he wasn’t!  He is home being loved by his parents and family like every newborn is supposed to do.  I will let Nikki’s words describe the story, but this is why we do what we do.  This is what motivates me every day.

The birth of my own subsequent babies proved to me personally that progressive care protocols can improve birth outcomes.  Nikki and I are not alone, but we are also working to ensure that more and more babies who have potentially devastating issues go on to live happy, healthy lives with their families who love them.

Thank you to everyone on the Star Legacy team from coast to coast who is working diligently toward his vision every single day.  We are extremely proud of all that we have done in the last 14 years – but we’re just getting started!

Read Daxton’s birth story (used with permission)…..  This is why we do what we do. 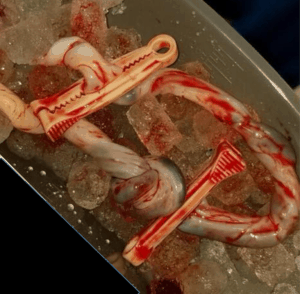 For those that have never seen an umbilical cord knot – this is what it looks like. A knot similar to this is what took Zayne from us unexpectedly, a week before his due date in 2015.

This picture is NOT Zayne’s cord, but is of our Daxtyn’s!! Luckily, with the help of an amazing medical team his story is far different from Zayne’s. We know that the information and education The Star Legacy Foundation offered to us after the loss of Zayne, and also when we found out about this pregnancy made some of the difference in the outcome. We trust that at the end of the day, it was God’s plan that determined the final outcome, but also know that because we had more information on cord issues and pregnancy loss we knew to insist on a higher level of monitoring during this pregnancy and when to seek medical help at the end. It made a difference in Daxtyn’s story, and is why we will continue to team up with The Star Legacy Foundation to raise money to bring awareness and education to infant and pregnancy loss.

The 2nd Annual Zayne’s Anchor of Hope Day  is coming up soon. We hope you will join us to make a difference!!

Many of you are asking the things that we did different with this pregnancy and if we knew about the knot prior to delivery.

We did not know that there was a true knot until after he was delivered via emergency C-section after 48 hrs of labor by induction and dilating to a 10. I went to the ER due to increased fetal movement after my baby had been moving nonstop for 4 hrs.  While the baby looked great for 3 hrs on the heart rate monitor when I arrived, I pushed for a BPP and for them to admit me. He wound up failing the BPP and the Dr admitted me and started induction. I labored for 2 days with the baby looking great on the monitor but when I started pushing the baby’s heart rate bottomed out and we wound up with an emergency csection.

I am certain that my persistence due to the knowledge I had from research I had done after losing my son in 2015 is what got this little guy here safe. Star Legacy and a book by Dr Jason Collins (Silent Risk) had made me aware of many things to watch for that I wasn’t aware of during my first pregnancy.

As far as I know, there isn’t a way to detect a cord knot prior to delivery (something that I hope can be changed soon).  (Editor note:  cord knots are detectible on ultrasound in many cases but screening for them is not routinely done).

Things we did for this pregnancy based on things we had learned after our loss:

I know that if I had not known what to look for and had not gone to the ER that day due to increased fetal movement (something I never knew you needed to worry about in my first pregnancy)…we may have had a different outcome!