Pregnancy belt created by Canadian med student to save babies 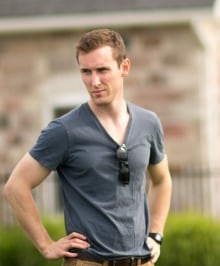 A pregnancy belt designed by a medical student from Summerside, P.E.I., may prove an inexpensive solution to a problem that threatens babies in the developing world, where the vast majority of stillbirths and low birth weight babies occur.

Some studies suggest women who sleep on their backs late in their pregnancy have higher risk of both low birth weight babies and stillbirths.

Islander Allan Kember was working with Global Innovation for Reproductive Health in Life in the U.S. when he and a colleague invented a belt women can wear to discourage them from staying too long on their backs.

Kember says, of the 2.6 million stillbirths and over 20 million low birth weight babies born each year worldwide, 98 and 96 per cent, respectively, occur in middle- and low-income countries.

He says the aim is to produce a product for less than $5.

Next month, Kember will observe 25 pregnant women wearing the belts at the Sleep Disorders Clinic at the QEII Hospital in Halifax.

Then, this summer, 100 women in Ghana will test the belts, with another 100 women acting as control subjects.

“So when that research came out, there was a call in that paper that said Ghana and other limited-resource countries urgently require simple interventions that could change body positions and get rid of potential risk factors.”

Recently, the project was one of only 30 out of about 600 that applied to earn a $100,000 grant from Grand Challenges Canada, a federal incubator program that funds projects that could help solve health problems in low- and middle-income countries.

Kember is also working with Innovative Canadians for Change, an Alberta-based not-for-profit that focuses on local and international development initiatives.

« 4th Annual Let’s Not Be Still Run/Walk
Can an overdue pregnancy raise the risk of stillbirth? »
Archives
Categories