Donate in Memory of Daniel and Cheyne

Hi, my name is Tamara. To tell our story I have to go back to the August before I got pregnant. My husband Tim hadn't been feeling well and his throat was extremely swollen. He went to see an ear, nose and throat doctor, who diagnosed him with Graves Disease.

For those who don't know, Graves Disease is a severe form of hyperthyroidism. Only 2% of cases are men. He was put on an anti-thyroid medication to help slow the growth of his thyroid so they can do the radiation treatment needed to kill his thyroid. They told Tim that while on this medication it was a 1 in 250,000,000 chance of him getting me pregnant.

On January 8, 2020 my husband came home from the doctors office with a pregnancy test for me to take. The doctor wants to be sure I’m not pregnant since Tim is having his radiation treatment the next day.

I take the test and within 30 seconds that positive line is starting to show. It was a miracle. We were elated but with Tim’s treatment the next day we had to get in contact with the doctor to find out what we need to do. We were told that I couldn’t be near him for a week. We told his mom and brother about the pregnancy and the situation of me not being allowed to be near him for a week. Daniel said our daughter and me could stay with him and his wife for the week.

So I packed a bag for me and one for our daughter Melissa (she was 18 months old at the time). We went and stayed at my brother in law’s house while my husband stayed at our house to quarantine himself. The week dragged on. All we wanted to do was celebrate together and we couldn’t.

Finally at the end of the week, I got to go home and celebrate our news with my husband. I started getting morning sickness shortly after. I got to the doctors the following week and found out that we are now 6 weeks along. Everything is going well at this point.

All of a sudden in mid February my morning sickness had gotten really intense. At the beginning of March I was scheduled for my first ultrasound. But I didn’t make it that far before I ended up in the emergency room. The morning sickness was so bad I couldn’t hold anything down and I was having really sharp pains in my upper abdomen. They do an ultrasound in the emergency room thinking it may be gallstones.

As the ultrasound tech is doing her thing, she checks on the baby pre doctors orders to make sure everything is ok there. All I hear from the tech is Oh My God. I’m worried at that. And she turns to me and says ” Mrs. Taylor I believe you are having twins.” At this point I’m completely shocked. We always knew it was a possibility since they ran on both side of our families. They discharge me contributing the pain and sickness to the twin pregnancy. Later that week I make it to my OB/GYN and they do an ultrasound, not only are we having twin they are monochorionic/diamniotic twins. That means they are identical twins sharing 1 placenta but have separate amniotic sacs.

A couple days later I end up in the emergency room again. This time they do an MRI and find a cyst on my pancreas. I am admitted into the hospital. They do an endoscopic fine needle biopsy to see if it is cancerous.

Thankfully it’s benign. After a week in the hospital I am released. I go home and everything is going well. I go to my 16 week appointment. We got to find out the sex of the babies. They put it in an envelope so I can find out with my husband. I get out to the car where my husband is waiting and we open the envelope….. We’re having boys! We were so excited.

On April 30 I have an ultrasound appointment with the high risk doctor to check on everything. Buut we didn’t get the results that we wanted. Instead we were informed that we were in the beginning stages of Twin to Twin Transfusion Syndrome (TTTS). Because of them sharing one placenta, the some of the blood vessels become connected and one baby can take more nutrients than the other.

My doctor refers me to a specialist in TTTS in Baltimore, who does a surgery to help correct it. They wanted to see me the next day. But since it is out of state we needed to get approval from the insurance company before we could even make an appointment. It took 24 hours to get approval. By then the next time I’d be able to be seen is Monday May 4. So we make our plans to go up and for my mother-in-law to watch Melissa. Monday morning we head up to Baltimore since it’s only a 2 hour drive. My husband had to wait in the car during my appointment (had they done the surgery, they would have allowed him to stay in my room with me). I lay there as they do an ultrasound to see how everything is. It’s not good at all. Their hearts had stopped. We lost our boys. I came back out not too long after going in and had to tell my husband.

We drove the 2 hours back home and the next morning went to the hospital to be induced. I was 21 weeks along. Daniel Jackson and Cheyne William were born on May 6, 2020, stillborn. 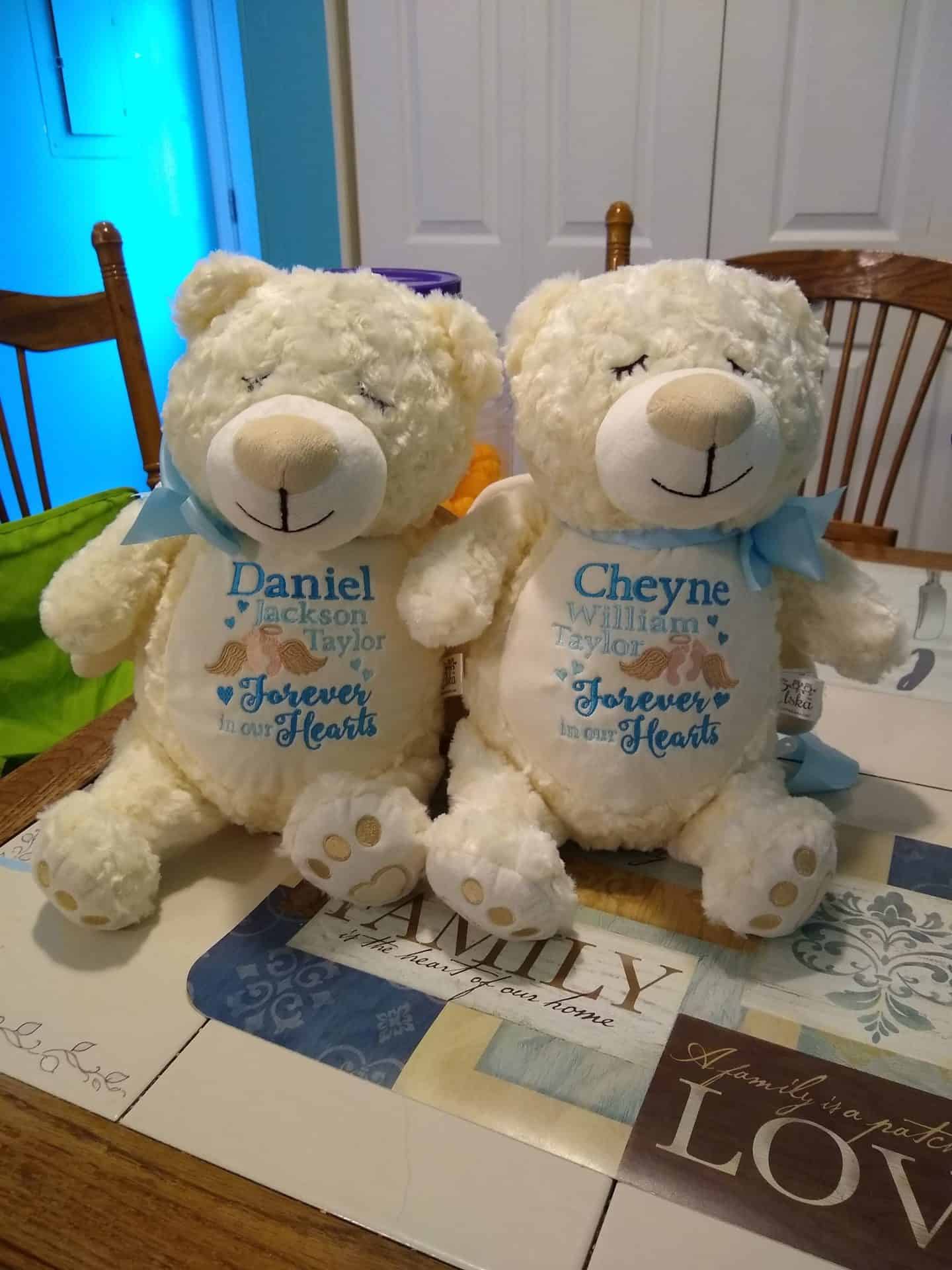