I had the pleasure of spending this week in Montevideo, Uruguay at the Joint Conference of the International Stillbirth Alliance (ISA) and the International Society for the Study and Prevention of Perinatal and Infant Death (ISPID).  In addition to visiting a beautiful country with a rich history and friendly people, I was able to learn more about the progress toward stillbirth prevention and meet with some of the world’s most passionate stillbirth researchers!

I am extremely excited about some of the research being done.  Several presentations gave more detail about the studies in the recent Lancet Series on Stillbirth.  Others shared new and exciting findings.  Here are a few highlights of what I took away….

There are now four studies that have shown that sleeping on your back can increase the risk of stillbirth.  It doesn’t appear this can cause problems by itself, but can be significant for babies that are at risk for other reasons first. 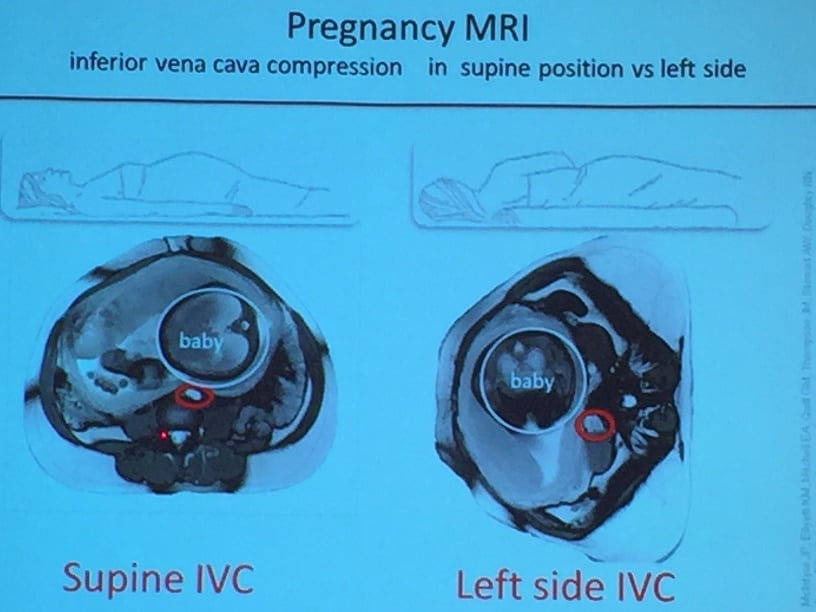 A photo of a pregnant woman’s inferior vena cava while lying on her side, and then immediately after lying on her back shows obvious compression.  This can decrease the blood flow throughout her body and to her baby.  Nurses have understood this theory for decades and will turn a woman onto her side if the baby starts to show distress or if the mother become light headed.  It is worth noting that this woman didn’t experience any symptoms – so we can imagine how much compression might be present for those who are symptomatic.

Dr. Jane Warland presented data on use of a belt designed to keep pregnant women off their backs while they are sleeping.  It also indicated that the baby has less distress and the mom had better oxygenation on nights that mom wore the belt!

Researchers in New Zealand have seen a decrease in their overall stillbirth rate in the last few years since these studies were in the news.  Even without official medical recommendations, it appears women have started to sleep on their sides during pregnancy, and it appears to have prevented some stillbirths!  In any case, it hasn’t shown to be harmful at all.

All of the sleep researchers are cautiously optimistic about their findings, but I suspect that very soon there will be significant recommendations about encouraging pregnant women to sleep on their sides.  And you may see more devices available to help them do so all night.

Many studies are looking at fetal movement and how it may be a symptom we can use to detect a vulnerable baby.  Over the years, interest in this topic has been hot and cold, but there is new excitement.  In general, the researchers all recognize that fetal movement is definitely an indicator that women and their providers should monitor.  The research is trying to better identify how to measure it and how to respond when it changes.

All of the studies presented show that there is not a certain number of movements or ‘kicks’ that can determine if the baby is well or not.  Altered fetal movement is the concerning factor.  If a baby is moving significantly less, or more than usual, that should be reported and investigated.  Similarly, there can be differences in how the baby is moving.  For example, a baby who usually has smooth and calm movements but is suddenly showing strong, jerky, and sharp movements should be evaluated.

It also doesn’t matter how a mom monitors fetal movements.  Studies reported looking at kick charts, smart phone apps, or even just moms making a mental note.  They were all equally effective.  The important thing is that moms are cognizant of baby’s activity and report their findings to their health professional.

My favorite analogy on this topic came from Dr. Alex Heazell.  There is often a lot of concern that fetal movements aren’t a very specific ‘test’ of distress – and this is true. But Dr. Heazell pointed out that fetal movements aren’t a test, but a symptom.  Unfortunately, symptoms are not good indicators of disease in any aspect of medicine.  However, they still have value.  He used the example that only 5% of people with chest pain are actually having a heart attack.  Yet, we don’t hesitate to tell someone clutching their chest that they should be seen and evaluated immediately.  We must take fetal movement as a serious and imperfect symptom.

I was very proud of our entire organization and all of the families who participated in the STARS Study when Dr. Jane Warland and Dr. Alex Heazell presented some of the findings at this conference.  In addition to data about fetal movement that reinforced the other presentations, they talked about hiccups, time of death, increased fetal movements, and maternal intuition.  Each of these aspects of the STARS study was included because we need to know more information about them.  What the STARS study accomplished was to indicate these properties occur often enough to warrant future study. For example, 83% of the women who experienced a stillbirth said they had a gut feeling at some point in their pregnancy that something was wrong or that the pregnancy wouldn’t end well.  In comparison, only 19% of the women who delivered a living baby had the same instinct.  Many women couldn’t explain the feeling, but knew they didn’t feel right.

We continue to learn more and more about providing proper bereavement care to families.  While listening to our South American colleagues, I was reminded that we have made some progress in the US.  One of the main priorities for advocates in Argentina is giving families the right to name their babies and see/hold their babies.  Many families around the world are still prevented from the memories and honors most Americans are allowed.

But, everyone has room for improvement.  Discussions about bereavement photography, culturally-competent care, care in subsequent pregnancies, and mental health resources remind us there is still much to do.

I was intrigued by the many presentations looking at autopsy and audit after a stillbirth.  Fetal autopsy and placental pathology are considered the two most cost-effective tests to determine a cause of death.  Autopsy rates around the world for stillbirth remain very low which reduces the number of families who might learn a cause of death and decreases the information we can learn from many of these babies.

Reasons why families often don’t want an autopsy include the idea that the baby has suffered enough, they have too many unanswered questions, or they fear they won’t learn an answer anyway.  In the US, we also hear of families concerned about the costs associated with this testing.  Families who agree to autopsy are usually seeking as much information as possible, want to improve general medical knowledge, desire information to guide future pregnancies, or hope to find closure.

A study in Holland looked at if parents should be involved in the review/audit of perinatal deaths that is usually conducted by the medical personnel involved.  This study indicated that parents were interested in participating and felt it would help them trust that they had honest answers about what went well or not and that they would be a part of conversations deciding how the health professionals can learn from the situation to improve.

The PSANZ organization in New Zealand has created Project IMPROVE.  This is a training course for obstetricians and midwives to learn more about investigating stillbirth and neonatal death.  It is a well-done curriculum that reviews options for tests, how to ensure the best results from autopsy and pathology, how to communicate with families, how to conduct beneficial audits of the care, and how to evaluate and classify pathology findings.  Star Legacy Foundation is excited to be partnering with this organization, Dr. Bob Silver and Dr. Ruth Fretts to bring this curriculum to the United States!

Babies who are not growing properly are known to be at increased risk for stillbirth.  Dr. Heazell presented information about placenta growth factor and other biomarkers they are testing to better predict and identify babies who will/are not growing well.  The placental growth factor combined with ultrasound evaluation is looking very promising and is just one of the tests they are investigating to know more about placental health and preventing/treating placental insufficiency.

Dr. Vicky Flenady presented some challenges to the group in the final session.  Some key initiatives she presented:

Her final message is:

What will you do to ensure that babies who are stillborn are no longer left out or left behind???

I agree with her proposals and am motivated to do my part.  Throughout this week, I was able to talk to a number of individuals and I am very excited about how the projects of Star Legacy Foundation are going to fit in with these world-wide goals and initiatives.

First – Star Legacy will be hosting the 3rd Stillbirth Summit in Bloomington, MN June 21-23, 2017.  We hope you’ll join us to hear first-hand more research findings and participate in discussions about how to be part of the solutions!

Second – Star Legacy is working on some exciting research initiatives that will be launched in the next few months.  I am confident they will be extremely helpful to researchers and significantly move forward what we know about all forms of pregnancy loss.  Be watching our newsletter and website for more information and how you can help!

Third – we will continue our patient education programs focusing on knowing your risk factors, adopting a healthy lifestyle, monitoring baby’s activity, and empowering women.  We will also partner with health professionals to better assist families in making decisions about testing after a stillbirth.

Fourth – we are supporting researchers in the US and Australia who are looking at the stigma around stillbirth and a world-wide need for more respectful maternity care.

There is much more to come – but we can all be part of this momentum that is palpable and exciting!  Contact us if you would like to be part of what Star Legacy Foundation is doing!