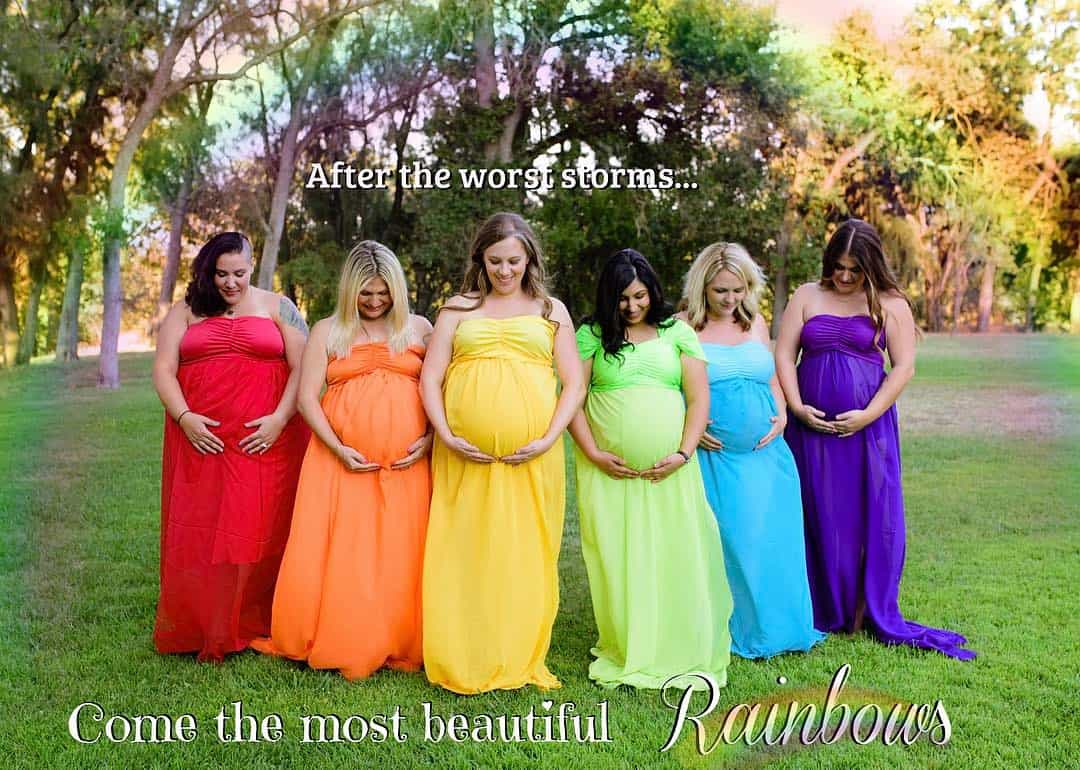 The very concept of a “rainbow baby” is enough to make most warm-blooded creatures well up with tears. It’s a child born to parents who previously lost a baby because of miscarriage, stillbirth, or sudden infant death.

The new baby is their rainbow after the rain of loss.

It’s also no wonder that photo shoots of rainbow babies, and mothers pregnant with them, have gone viral in recent years. This week, one happy father shared the news that all six mothers in one of those photos have since given birth to healthy babies.

“Remember this gorgeous picture that Leila Steffens took of mothers (my wife is yellow) who had a #stillborn and are pregnant with their #RainbowBaby?” wrote Gavin Ferguson, a DJ for Sacramento’s 107.9 KDND, on Instagram. “Well, I’m SO happy to say the last mom had her Rainbow Baby yesterday!! Congrats so hard to Taylor (purple) and Ryan for their gorgeous daughter!”

According to the Centers for Disease Control and Prevention, about 1 percent of pregnancies in the U.S. end in stillbirth, and in many of those cases, the cause of death is unknown. The women in the photo are all women that Ferguson himself gathered after meeting them through various support groups and his radio show in the year since his wife, Stacy, delivered their stillborn baby Phoebe in August 2015, five days after her due date. He had seen another viral photo of pregnant women in a rainbow — though those women weren’t pregnant with rainbow babies, it was shared by many to raise awareness of them nonetheless.

“One day I just contacted everybody on one big group text message,” Ferguson tells Yahoo Beauty. “I said, ‘How do we feel about this photo shoot? We’re all pregnant right now, and I know that we’re all freaking out and we’re all terrified, but what if we did this photo shoot?’ The photographer even made the outfits for everybody. I’m the only guy that’s on a group text that’s still going on.”

They took the photo last summer but didn’t post it until September, because one of the mothers didn’t want to jinx anything until she’d given birth. In August, the Fergusons and their 5-year-old son, Connor, welcomed baby Theo Jonas. Now that the sixth baby of the group has been born, there are plans under way for another shoot in the spring.

The photo is just one of many things the Fergusons have done since their loss. Three days after Phoebe’s death, they shared their story on his show, The Wake Up Call.

“We tearfully talked about the experience, and I even said then, it makes me mad that nobody ever talks about this … that you can lose your baby right at the very end,” Ferguson says. “I still get mad when I see people who are pregnant and get bogged down with bulls**t that doesn’t matter. Like, what’s the nursery going to look like, or they get disappointed by the sex of the baby. None of this matters. You need to focus on getting a healthy baby, alive. Everything else will fall into place.”

The Fergusons joined various support groups for infant loss and went to therapy, sometimes twice a week, for grief and posttraumatic stress disorder.

“Everybody who loses their baby, especially in the third trimester, suffers from some form of PTSD,” Ferguson says. “In the treatment of PTSD, we learned about posttraumatic stress growth, where some people out of tragedy can become better people. They use it to push themselves to do positive things that they typically never would have done. For us it was, let’s start a charity.”

Though they didn’t have enough time to set up a nonprofit, they raised $10,000 in a 5K run in November and donated all proceeds to Sutter Roseville Medical Center, in Roseville, Calif. It’s going toward a memorial garden for bereaved parents, an outdoor chapel, and a meditation center in the cancer ward. Ferguson has bigger plans for the charity they’ve called Phoebe’s Flight.

“What we’d like to do is have that money go towards helping families with grief [caused by] pregnancy and infant loss, in Northern California, to be able to get the specialized counseling that is so desperately needed for people like us,” he says.

Another woman in the rainbow babies photo helps by raising money to buy hospitals CuddleCots, which allow parents to keep their deceased infant in the room with them long enough to say goodbye.

“These mommas are just 6 out of the millions that experience pregnancy/infant loss every day,” Bolen wrote on a Facebook post that has been shared 21,000 times in just two months. “Some speak out. Some stay silent. Some have lost many. Some try for months or years. Some meet their sleeping angels. All loved and never forgotten.”

A rainbow is a promise
of sunshine after rain
of calm after storms
of joy after sadness
of peace after pain
of love after loss.